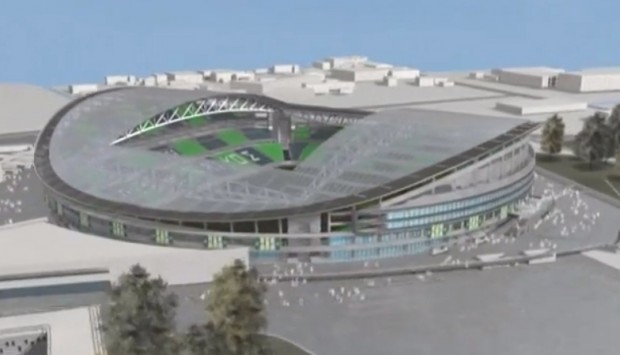 Description: The relocation of the Stadium of Panathinaikos was part of a wider regeneration program of Athens City Center. The objective was to create an important center for professional and amateur sports, within a wider area. Our architectural design study for the stadium took this in to consideration and therefore the end result is a construction within a wide open area, following the landscape. It is a complex that includes sport, cultural and recreational facilities. Panathinaikos Stadium is to be developed inside the city center and for that reason, the design study contains the “city dynamic”. The stadium should function as a cultural landmark, inside a constantly changing environment. Hence its location is in the center of the site (178.000 sq.m.) and at the cross of the road network axes. The conceptual idea considered equally the morphological and functional integration of the different uses inside one “shell”, having as a criterion their design unity but also their distinct differentiation. Sport areas and secondary-use areas engage, interact and form a single multifunctional ensemble. The stadium is characterized by a potential introversion, which is related to the creation of a dynamic sport atmosphere, while the ties to the area that surrounds it are kept intact. The new Stadium of Panathinaikos in Athens is of the “elite” class, according to UEFA regulations, and will the home of the most historical and successful team of Athens.